Home › Who We Are › Our History

The first settlers in Sharon Tow 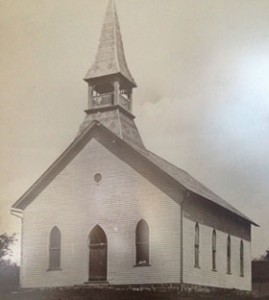 nship came from New England to settle in the Western Reserve, a land grant given to the State of Connecticut. Remembering the basic foundation for settling the New World was the Freedom of Worship, even though the majority of settlers were of the Presbyterian teaching, the few members, 12 families, reared in the Methodist way of thought, banded together in 1832, thus forming the nucleus of our present United Methodist Church.

They held their meetings in the homes. Their minister was a Circuit Rider, changing often.

In 1842, the present building was constructed from lumber hewn from the farms’ timber under the leadership of Rev. Coleman and supervision of two head carpenters, Marshall Fairchilds and Valetine Waltman, with all members working on the project.

Following the New England custom, there were two doors to the east of the sanctuary, one for the men and the other for women and children. They used divided pews in the sanctuary until 1886 when the building was re-sided, the interior rearranged and re-decorated. This included changing the high pulpit from the west to the east end, the addition of the pulpit alcove, the two entrance doors to the east to one central door to the west. The windows of 24 panes were changed and new pews were installed. This was done under the leadership of Rev. H.P.Richards.

In 1925 the tall steeple was removed, the horse sheds back of the church were removed and the drive graveled.

In 1937, a divided chancel was dedicated with the following pieces, each one given as a memorial: altar, lectern, coverings, cross, candelabra, and chancel light. Thanks to Rev. Hanninger, in 1938 the church was carpeted.

In 1949 an electric organ replaced the pump organ. In the same year, the men of the church dug and laid a new foundation and basement under the church in preparation for the new church building, with ground-breaking the following April. In July of that year the corner stone was laid, witnessed by the congregation. The building was completed in 1951, labor principally by men of the congregation, under the supervision of John Lonberger. The following year, the men painted the entire building.

In 1956 a front portico was added to our church, a gift from Mr. and Mrs. George Oenslager in memory of her parents, Mr. and Mrs. John Melvin Alderfer. That year a piece of land 60 by 100 feet east of the church was purchased for $300 to be used as more parking area and a new garage was built at the parsonage.

In 1966 Rev. Blair Stewart, with the help of the Methodist Men, incorporated the “Catacomb”. This was the beginning of a Christian Youth Center.

In 1972 we received two donations to the Building Fund, from the two estates of Mrs Nina Rumpf and Mrs. Pat Woodruff, totaling $12,000. This money was used to refurbish and remodel different areas of the church. The kitchen was completely remodeled, Fellowship Hall was finished with dry wall, wood panelling, wallpaper, floor tile, and ceiling tile. The sanctuary was painted and a new piano was purchased with money from Mrs. Griswald’s estate.

A Memorial Library was started the summer of 1974.

Since then many new things have been added to aid in our worship program. In 1981 a beautiful walnut cross was built by Randy Raw from wood cut years before off his father’s farm. It was backlighted and now stands in the apse of the sanctuary behind the altar as the focal point of our worship service.

Under the direction of the Reverend Stanley Wallace, a committee was appointed to inaugurate plans for the Sesquicentennial year of 1982. Highlighting the events of the year was the Dedication of a Memorial Steeple and the Re-dedication of our Church on May 23rd. The Steeple replaced the one taken down in 1925. We added a Schulmerich Carillon to our steeple to complete and exciting and eventful year of the church. We invited members of the Granger United Methodist, with whom we had shared a two-charge Minister until 1948, as our guests.